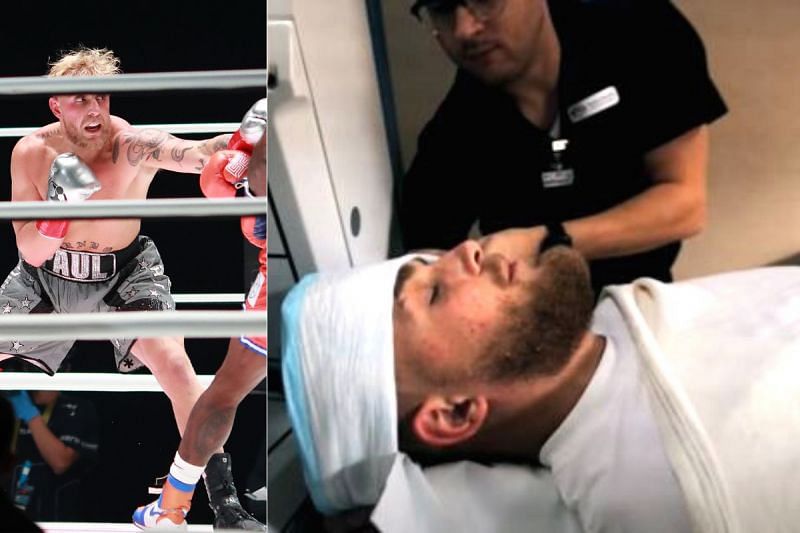 YouTuber-turned-boxer Jake Paul could have been in the hospital just before his fight against Nate Robinson in treatment of a broken nose. The exact reason is unknown.

Paul secured the second victory of his professional boxing career with a stunning knockout of former NBA player Robinson in November 2020.

Following the win, Jake Paul admitted on Twitter that he contested with a broken nose, which did not allow him to spar leading up the fight. He also shared a gruesome image of his injured nose. Jake Paul claimed that he had sustained the injury while trying to meditate, three weeks before the fight.

It is likely that the broken nose landed Jake Paul in the hospital ahead of the bout. During a press interview with ESPN’s Ariel Helwani, Jake Paul showed up from what appeared to resemble a hospital cabin. When asked about it, Jake Paul answered casually that he was at the hospital for a “little checkup” as he had punched a hole through a car.

“Uh, I’m just chilling man, I came to the hospital to get a little check up… We were having a little morning practice, and my team was afraid that I was turning into Iron Man. I punched a hole through a car.”

No matter the reason of his hospital visit, Jake Paul did not let it interfere with his match and won fair and square with a clinical knockout of Nate Robinson. The fight was the co-main event of Mike Tyson’s much-hyped return to the ring to face Roy Jones Jr. at the November 28 exhibition event.

Who is Jake Paul fighting next?

Post-fight, he went on to call out several UFC fighters, including Conor McGregor, Dillon Danis, and Ben Askren for his next bout.

While Conor McGregor has been silent about it, preparing for his more important UFC bout against Dustin Poirier, Ben Askren has gone ahead and accepted the challenge.

“Yes, Mr. Jake Paul, I do accept. I know you called me out after your last fight with that bum Nate Robinson and listen, it’s a pretty simple choice. I’m going to make a whole bunch of money to beat up a guy who is pretending to be an athlete, because at the end of the day that’s what you’re doing,” said Askren.

Askren also pointed out that he is a former Olympian, an NCAA titleholder, and a champion in multiple MMA promotions.

He agreed to fight Jake Paul on March 28 in Los Angeles and ‘humble him like millions of people want to see happen.’

However, there is no official word until now who Jake Paul will fight next.

Real Valladolid vs Valencia prediction, preview, team news and more
Where to ‘Destroy Fishing Rod Barrels’ in Season 5
To Top