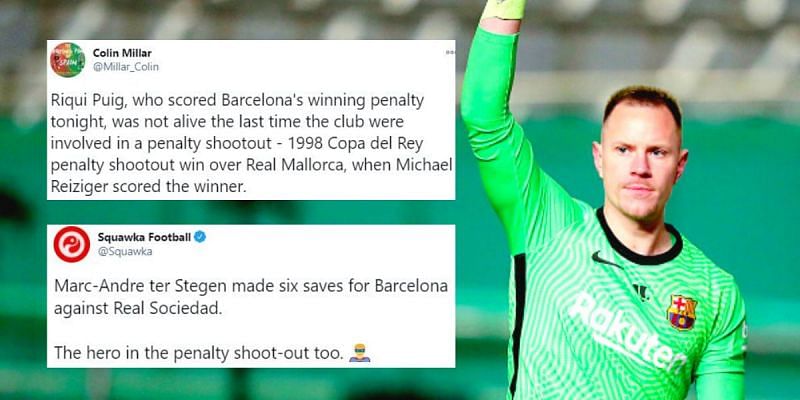 Barcelona needed penalties to see off Real Sociedad in the semi-final of the Spanish Super Cup, as they won the shootout 3-2 after 120 minutes of football failed to separate the two sides.

Lionel Messi was left out of the Barcelona squad as a precaution, as the Blaugrana skipper picked up a niggle in the club’s previous league encounter.

Frenkie de Jong broke the deadlock before the interval with a stunning header, as he towered above the Sociedad defense at the near post to put his side ahead. In Lionel Messi’s absence, Barcelona didn’t look at their brilliant best and were soon pegged back by the home side.

Mikel Oyarzabal restored parity with a second-half penalty, as Sociedad got their reward for producing a spirited showing. Both sides tried their best to score the decisive goal on the night but were unable to do so, as the game went into extra time.

Barcelona manager Ronald Koeman made a handful of changes to his side and introduced the likes of Miralem Pjanic, Fransisco Trincao, Riqui Puig and Junior Firpo, as his team looked to score a late winner. However, that wasn’t to be, as neither of the two sides could put the ball into the back of the net in extra time.

Barcelona prevailed 3-2 on penalties, as Marc-Andre ter Stegen made a series of outstanding saves for the home side. Puig scored the decisive spot-kick for his side and capped off a fine cameo with a telling contribution.

Here are the best tweets, as Barcelona made it through to the final of the Spanish Super Cup.

How about that Frenkie de Jong header, ey? 😲

The midfield maestro went all flying-Dutchman when he steered home Greizmann’s cross from a seemingly impossible angle.

-Scores the opening goal with a lovely header
-Concedes a penalty for handball
-Misses his penalty in the shootout.

However, Barcelona are through to the final. pic.twitter.com/GaAZsl6u0F

Frenkie De Jong has netted his second goal of 2021 across all competitions, already equalling his goals’ tally from the whole of 2020.

We’re not even half-way through January. 😅 pic.twitter.com/QRKCEfXven

Is Conor McGregor staying at this mansion in Abu Dhabi?
Projecting the Houston Rockets’ starting lineup with Victor Oladipo
To Top