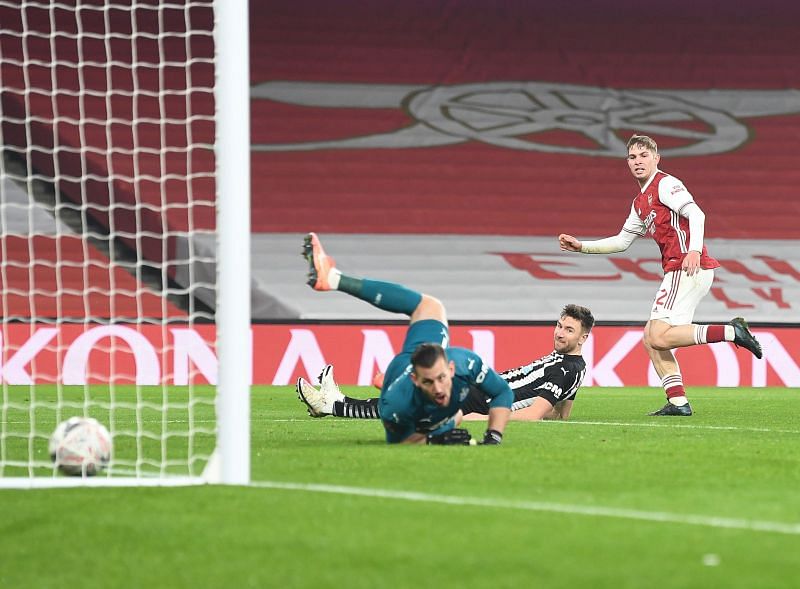 Arsenal fans are absolutely buzzing on social media, and it’s clear to see why. The Gunners beat Newcastle United in the FA Cup on Saturday to extend their winning run.

After a poor run of results from November to December, Arsenal have now won their last four games in all competitions – a run that started with a hard-fought victory against Chelsea.

Key to that run, though, has been the performances of the youngsters introduced into the first team by Arsenal manager Mikel Arteta. After watching some of his senior players underperforming, the Spaniard turned to youth to salvage the situation.

While it was a huge gamble, it also turned out to be a masterstroke, as Emile Smith-Rowe, Bukayo Saka, Joe Willock and Reiss Nelson have all stepped up. Arteta’s reward for being bold is four consecutive wins.

On Saturday, Arsenal laboured to break down a resilient Newcastle United side at the Emirates Stadium in a key FA Cup tie.

Arteta named a strong squad that included Nicolas Pepe, Willian and Pierre-Emerick Aubameyang. However, Arsenal rarely troubled Steve Bruce’s side till Saka and Smith-Rowe were introduced.

The pair has been, by far, Arsenal’s best players in recent weeks, and they didn’t disappoint.

Playing on the left side of attack, Saka embarked on a couple of runs and marginally saw one of his efforts fly over the bar. Smith-Rowe was also a lively presence and scored Arsenal’s crucial opening goal in the first half of extra time.

Arsenal went on to win the game, as Pierre-Emerick Aubameyang added a second goal within three minutes to end the game as a contest.

The Gunners have a rich history of providing talented young players a chance, and so far the current crop is justifying its places in the first team.

A statement to the senior players

Arsenal’s poor run of form coincided with some woeful performances from some of the club’s senior players. Aubameyang has been decent but has largely struggled in front of goal.

Willian too has appeared out of depth and seems to have completely forgotten how to kick a ball at the moment. Meanwhile, Pepe has also been largely inconsistent, which has made him a peripheral figure at Arsenal.

In recent weeks, Saka and Smith-Rowe have been preferred to Pepe and Willian, and it could only be a matter of time before the youngsters become mainstays in the first team.

“There is no message to any senior players; this is a squad of players with different profiles, and everybody has to be pushing each other and trying to make each other better,” Arteta said after the game, as quoted by Arsenal.com. “Everybody contributes in a different way because every player is different in the squad.”

The Arsenal boss may be reluctant to admit, but the impressive performances of the youngsters are a statement to the senior players. The message is clear: Saka and co. mean business and want to play regular football.