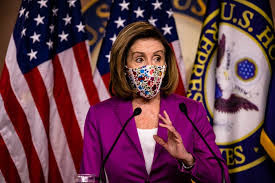 US House Speaker, Nancy Pelosi, has called for the removal of President Trump from office. She made the call 24 hours after supporters of President Trump invaded Capitol Hill where Congress was meeting to certify President-elect Joe Biden’s election win in the November election. The incident left four persons dead and several others injured. Read here and here.

Pelosi made the call for Trump’s removal while addressing a press conference on Thursday evening January 7.

“In the next 13 days, this dangerous man can do further assault on our democracy.

We are in a very dangerous place as long as Donald Trump remains in office,” the 80-year-old added, noting that Trump must be held accountable for the Capitol riot in Washington on Wednesday.

The President has committed an unspeakable assault on our nation and our people. I join the Senate Democrat leader and call on the Vice-President to remove this President by invoking the 25th Amendment. If the Vice-President and cabinet do not act, the Congress may be compelled to move forward with impeachment”

Earlier today, Senate Democratic Leader, Charles Schumer, called for the invocation of the 25th Amendment. Schumer said that if they failed to act, Congress should reconvene and impeach President Trump.

Watch a video of Pelosi speaking below