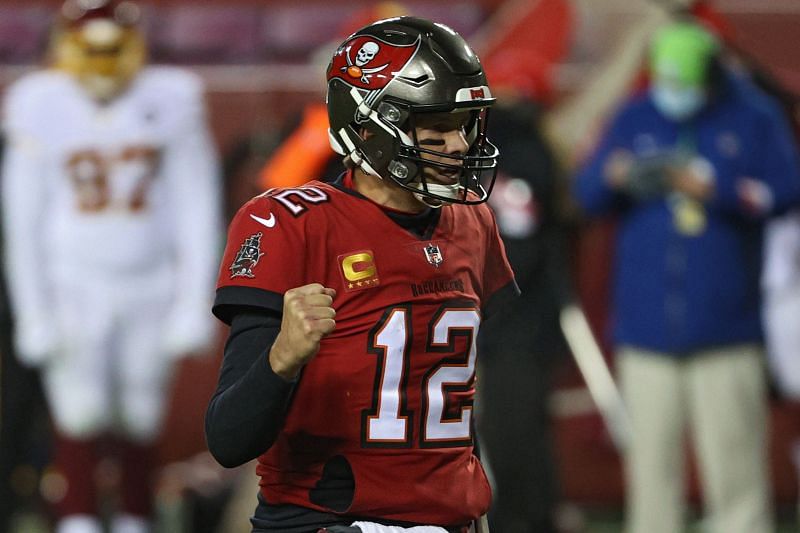 Tom Brady entered the 42nd NFL Playoff game in his NFL career on Saturday Night against the Washington Football Team. In the NFL Wild Card Playoff game against Washington, Tom Brady added another record to his books by becoming the oldest player in NFL history to throw a touchdown pass in the playoffs.

Washington kept the football game close but the Buccaneers pulled away late in the second half. Tom Brady was a big reason for the Buccaneers defeating the Washington Football Team. Tampa Bay’s win on Saturday night gave Brady his 31st NFL playoff win.

Tom Brady completed 22 passes on 40 attempts against the Washington Football Team. The 22 passes that were completed went for a total of 381 yards and two touchdowns. However, Washington did not make this an easy win for the Buccaneers.

After the Washington Football Team defeated the Philadelphia Eagles in Week 17 to clinch the NFC East division title and a playoff spot, rookie defensive end Chase Young went running off the field screaming “I want Tom.”

Chase Young did something that no one wants to do and gave Tom Brady more motivation.

Washington’s front seven only got to Tom Brady a total of three times and Chase Young did not record a single sack on the veteran quarterback. Tampa Bay Buccaneers made it their mission to prevent Chase Young from reaching Tom Brady on Saturday.

Brady took what the Washington defense gave him on Saturday night. Nothing was forced down the field or forced into tight windows. The Future Hall-of-Famer showed how he has made it to his 31st playoff victory by playing smart.

Key contributors from the Buccaneers win vs Washington

Tom Brady got a lot of help from the Tampa Bay Buccaneers running game in their NFL Wild Card victory. Leonard Fournette rushed for 93 yards on 19 carries and found the endzone. He also recorded 39 receiving yards on four receptions.

The Buccaneers are looking like they have hit their stride early in the NFL Playoffs. Tom Brady looks like he is locked in and ready to make a run. If the Buccaneers keep this play up we could see Brady hoisting his seventh Lombardi Trophy.