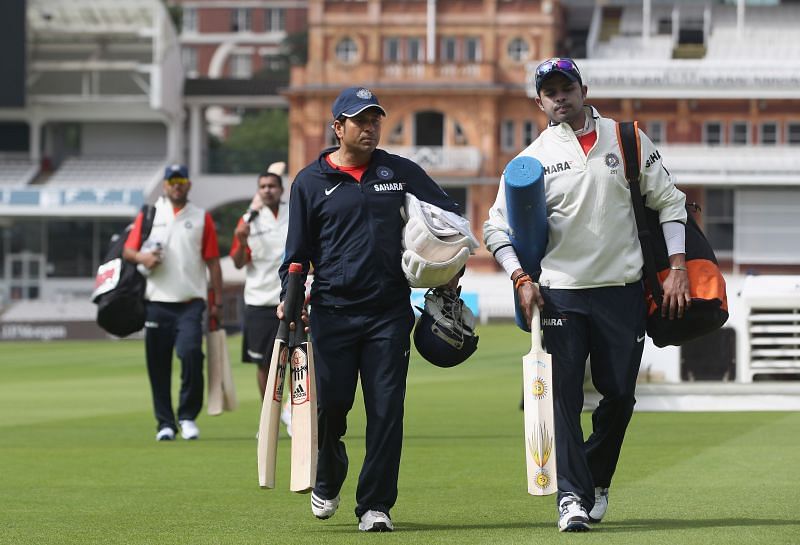 Kerala won the game by 8 wickets while chasing 197. They have a hundred percent record in the tournament as they defeated Puducherry in their first encounter.

Sreesanth was visibly delighted with Azharuddeen’s special knock and was seen kissing him on the cheeks in one of the pictures. The 37-year-old felt the opener’s innings was ‘classy’ and ‘stylish’ and termed their win against a heavyweight Mumbai side a ‘miracle’.

Sreesanth also posted a motivational quote in the final picture, which read:

“Mindset is what separates best from the rest.”

Mumbai had posted a massive total of 196-7 in their designated 20 overs at the Wankhede Stadium against Kerala. Sreesanth, who is making a comeback to domestic cricket after his seven-year ban, didn’t have the best of outing as he finished with figures of 0-47 in his quota of four overs.

However, Kerala turned the tables when Mohammed Azharuddeen launched an onslaught on the Mumbai bowling unit and helped his team chase the target with 25 balls to spare.

Sreesanth impressed in the first game as he finished with figures of 1-29 and helped Kerala restrict Puducherry to 138 in their 20 overs. Kerala went on to win that game by six wickets.

Sreesanth cleaned up Fabid Ahmed in that match, and one can say it was a peach of a delivery to get the opener. The Indian seamer visibly looked emotional after picking his first wicket after a long hiatus from the game.

Mohammed Azharuddeen reached his ton against Mumbai in 37 balls – the second-fastest century in Syed Mushtaq Ali Trophy’s history. The fastest belongs to Rishabh Pant, who smashed a hundred off just 32 balls.

After the inspiring knock, the Kerala Cricket Association announced a cash reward of ₹1.37 Lakhs to Mohammed Azharuddeen.

Kerala Cricket Association have announced a cash award of Rs 1.37 Lakhs to Mohd Azharuddeen after his unbeaten 54-ball 137 vs Mumbai.

Recently saw a video of McCullum where he says the ‘158’ changed his life. This could be Azhar’s 158 moment#SyedMushtaqAliT20 #KERALAvsMUMBAI