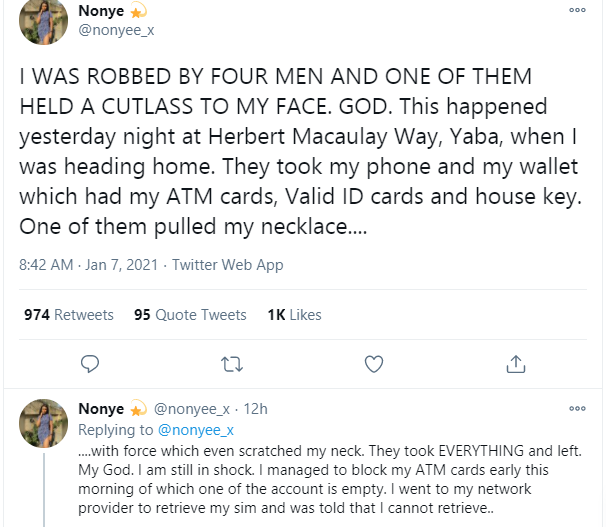 A robbery victim has narrated how she was told she can’t retrieve her SIM because the process was banned by the federal government due to the ongoing National Identification Number (NIN) registration.

@nonyee_x who disclosed that she robbed by four men along Herbert Macaulay Way in Yaba area of Lagos state, stated that her mental state is a mess.

Narrating how frustrating it was to be told she can’t retrieve her SIM, the Twitter user alleged that this country makes everything worse as she has cried from frustration, anger and pain.

I WAS ROBBED BY FOUR MEN AND ONE OF THEM HELD A CUTLASS TO MY FACE. GOD. This happened yesterday night at Herbert Macaulay Way, Yaba, when I was heading home. They took my phone and my wallet which had my ATM cards, Valid ID cards and house key. One of them pulled my necklace with force which even scratched my neck. They took EVERYTHING and left. My God. I am still in shock. I managed to block my ATM cards early this morning of which one of the account is empty.

I went to my network provider to retrieve my sim and was told that I  cannot retrieve the sim or even get a new one as the process has been banned by the FG due to the NIN registration issue. My mental state is a huge mess right now. I don’t even know where to start from. God.

My sim is an Airtel sim. Do you know how frustrating it is to be told that you cannot retrieve your sim? The country just makes everything worse. I have cried from frustration, anger and pain. I don’t know what to do. I feel so helpless. Where do I really start from?

My phone? My money? My ID cards. God.

Recall that in December 2020, telecommunication companies in the country were directed by Nigerian Communications Commission (NCC) to suspend sale, registration and activation of new Subscriber Identity Module (popularly known as SIM card).

Director of Public Affairs at NCC, Dr. Ikechukwu Adinde who announced the suspension, said the action became necessary in line with the federal government desire to consolidate the achievement of the SIM Card registration excercise of September 2019.

If you found out how some people make their money, you’d stop being so hard on yourself
1565 new cases of Coronavirus recorded in Nigeria
To Top