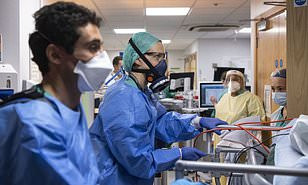 People previously infected with covid-19 have more protection against reinfection for the first five months than people getting the new Oxford vaccine, according to a new study by Public Health England (PHE).

According to the study, people that were once infected by the virus also have the same level of immunity for the first five months as the immunity that is provided by the Pfizer covid-19 vaccine.

Data from PHE’s SIREN study, which follows more than 20,000 healthcare workers at more than 100 sites across Britain, looked at how many members of NHS staff in the study group caught the virus more than once.

A total of 6,614 workers were found to have had the virus in early 2020, either through antibody testing, PCR swabs or clinical evaluation based on symptoms.

Just 44 people from this group later tested positive for the coronavirus as a result of reinfection.

The findings may mean people who have already had the virus are less likely to get reinfected if they come into contact with the virus again.

A total of 100 in the study people tested positive for SARS-CoV-2, the virus which causes Covid-19, but none were hospitalised. More than half (56 per cent) had symptoms.

The study focused on a specific type of immune response, called T cells, which are created by the body following infection. They are different to antibodies but are just as pivotal in fighting disease.

Researchers say they gave participants monthly antibody tests as well as weekly PCR swabs to monitor any infections between June and November 2020, a method that allowed the researchers to pick up on infected people with symptoms as well as those who were asymptomatic.

Professor Susan Hopkins from PHE, lead author of the study, says this method is more stringent than is used in the testing of vaccines, which relies solely on symptomatic cases.

Professor Eleanor Riley from the University of Edinburgh, who was not involved with the research, said: ‘The take home message from this study is that a primary infection with SARS-CoV-2 provides at least 94 per cent protection against symptomatic reinfection for at least five months.

‘This suggests that natural infection provides short term protection against Covid-19 that is very similar to that conferred by vaccination.’

Professor Hopkins said in a press conference that the protective effect of previous infection is approximately as robust as that of the Pfizer vaccine and ‘much better’ than the AstraZeneca/Oxford jab, which registered an efficacy rate of 62.1 per cent in participants who received two standard doses.

However, the 44 cases (two probable and 42 possible) meet criteria which led to their inclusion in the study, including a positive test for SARS-CoV-2 infection.

‘The findings will help to give, alongside the vaccine, the ability to slow transmission of the virus,’ Professor Hopkins said.

‘But it is not complete protection and people still need to be careful when out and about and take precautions.’

Professor Susan Hopkins said: ‘This study has given us the clearest picture to date of the nature of antibody protection against COVID-19 but it is critical people do not misunderstand these early findings.

‘We now know that most of those who have had the virus, and developed antibodies, are protected from reinfection, but this is not total and we do not yet know how long protection lasts.’

‘This is good news in terms of the long term trends of the pandemic. However, asymptomatic reinfections are not zero, so you cannot assume that just because you have had the virus before that you can’t be infectious,’ she says.

‘These data reinforce the message that, for the time being, everyone should consider themselves to be a potential source of infection for others and should behave accordingly.’

Governor Obiano, his CoS and wife are not infected with COVID-19
Nigerian national shot dead by police during drug sting in the Philippines
To Top