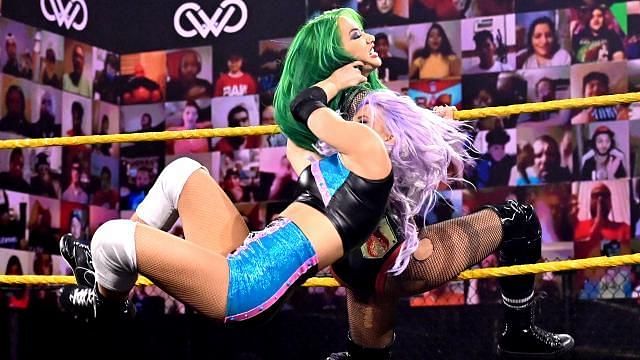 As confirmed by WWE NXT on Twitter, Shotzi Blackheart is set to lock horns with Candice LeRae this week. The two Superstars have been involved in an intense rivalry on the black and gold brand over the last few weeks.

The history between Candice LeRae and Shotzi Blackheart on WWE NXT

The feud between the two Superstars dates back to WWE NXT’s Halloween Havoc last year. Blackheart decided to attack LeRae after she was irked by the latter’s constant use of unfair means to advance on the roster.

Soon after that, both Blackheart and LeRae led their respective teams in a brutal WarGames match. In the end, LeRae managed to pick up a victory, but the rivalry was from over.

Last week at WWE NXT’s New Year’s Evil, Blackheart aligned forces with Kushida, and the two locked horns with Johnny Gargano and Candice LeRae in a mixed tag team match. After an entertaining battle, Kushinda and Blackheart managed to defeat their opponents.

A ruthless LeRae is now adamant about seeking revenge against her nemesis. She has a chance to go after Blackheart, who is quickly emerging as a promising babyface on WWE NXT. It is worth noting that LeRae has dependable alliances, which would stack the odds against Blackheart.

Who is The Predator? A look at the latest skin to come to Fortnite
Syed Mushtaq Ali Trophy 2021: Virender Sehwag praises Kerala opener Mohammed Azharuddeen for his blistering ton against Mumbai
To Top