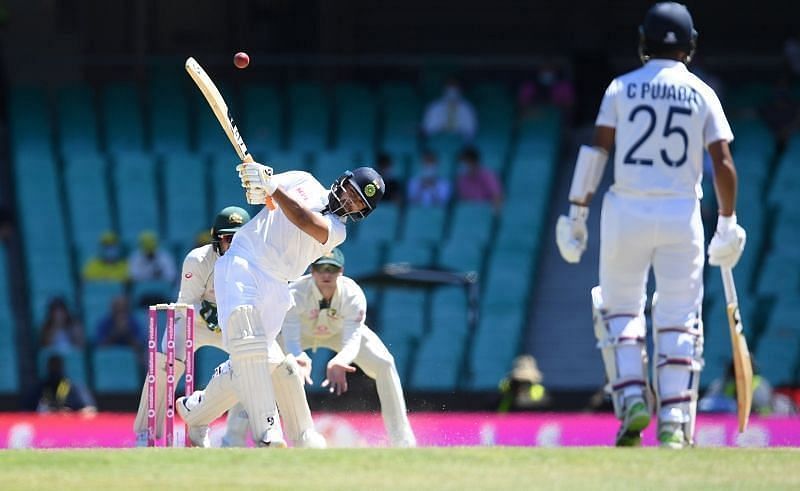 Young Indian wicket-keeper-batsman Rishabh Pant played a magnificent knock of 97 on Day 5 of the third Test against Australia at the Sydney Cricket Ground.

India were set a mammoth total of 407 runs to win the Test. And Rishabh Pant was promoted to number five after the visitors lost their stand-in skipper Ajinkya Rahane (4) early on the last day.

Pant, who did not keep wickets after injuring himself while batting in the first innings, came out with a mission. Despite India being in trouble at 102 for 3, the southpaw decided to take on the Australian bowlers.

Rishabh Pant was particularly severe on Aussie off-spinner Nathan Lyon, smashing him for consecutive sixes to bring up his fifty.

The 23-year-old was lucky too as Tim Paine twice dropped him off Lyon’s bowling. The veteran off-spinner eventually had the last laugh as he dismissed Rishabh Pant just three short of what would have been a memorable hundred.

Rishabh Pant falls only three short of what would’ve been a brilliant century, with Nathan Lyon finally getting his man!

How huge a moment is this? 🧐 pic.twitter.com/TznjzLzFbd

Pant’s 97 came off only 118 balls, and featured 12 fours and three sixes. Although the left-handed batsman missed out on a well-deserved century, he did break a few records along the way.

During the course of his 97, Rishabh Pant became the fastest visiting wicket-keeper to score 500 runs in Tests in Australia. After 10 innings in Australia, Rishabh Pant has 512 runs to his name at an average of 56.88 with one hundred and a fifty.

Besides Rishabh Pant and Jeffrey Dujon, Englishman Alan Knott is the only visiting wicket-keeper-batsman to have registered more than 500 runs in Tests in Australia.

Rishabh Pant is also the first wicket-keeper-batsman from Asia to have scored more than 500 runs in Test matches in Australia.

Most runs by an asian wicket keeper in Australia:

The earlier record for most runs by an Asian wicket-keeper in Tests Down Under was held by India’s Syed Kirmani. The former India stumper scored 471 runs in 11 Tests at an average of 29.43 with two fifties.

MS Dhoni is next on the list with 311 runs in nine Tests at a poor average of 19.43 with a solitary fifty.

Rishabh Pant is now the youngest wicket-keeper to score 50-plus runs in the fourth innings of a Test in Australia.

Rishabh Pant becomes the youngest keeper to score 50-plus runs in the 4th innings of a Test in Australia – 23y 95d.

Rishabh Pant (23 years and 95 days) went past legendary former Aussie wicket-keeper Ian Healy’s record. The Australian was 24 years and 216 days old when he made 52 against the West Indies at Perth in December 1988.

Only two wicket-keeper-batsmen have registered hundreds in a fourth innings of a Test match in Australia – Adam Gilchrist (Hobart 1999) and Alan Knott (Adelaide 1975).