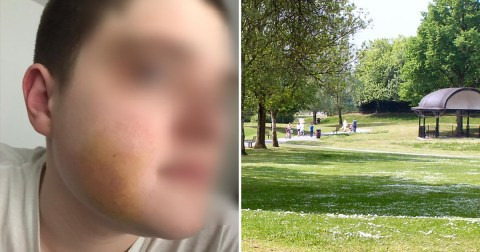 A 16-year-old boy suffering from autism was beaten up and mugged at knifepoint with thieves taking his money he had received for Christmas and his birthday.

The attack which happened on January 5 is one of five park robberies revealed by police this week involving group of teens using knives to threaten victims and stealing cash, electronics and a mountain bike.

Harry, was walking through Parr Fold Park at 6pm in Walkden, Salford, UK when two guys approached him. 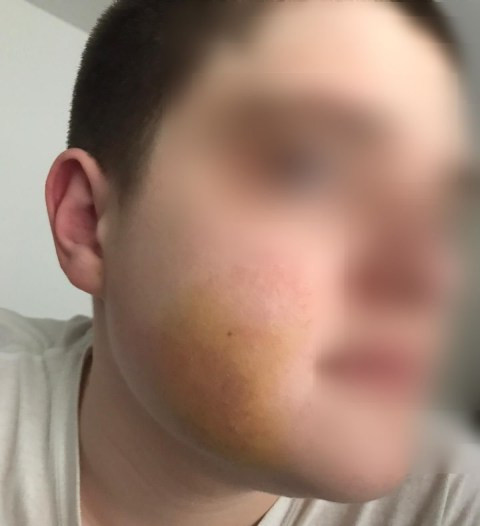 One hit him in the face while the other punched him. They then threatened him with a kitchen knife and demanded he gave them the £350 that he had in his rucksack which he received during Christmas and his birthday.

Harry had to wait until he was home to tell his family about the attack as he did not have his phone on him.

His mum, Lisa, told the Manchester Evening News the attack left her ‘heartbroken’ and worried about the knife.

She said: ‘It just hurts me. Your stomach flips like nothing I’ve ever felt before. ‘If they stabbed him, he had no phone and it was dark. He could have been left there to die.  ‘They could have stabbed him… and over what? A bit of money? His life is priceless.’

According to Manchester Evening News, one of the attackers was wearing a grey hoodie, the other was wearing a black hoodie and both were wearing black face masks.

Just over an hour before Harry was mugged a different teenager was assaulted on the cycle path and his headphones were taken. The next day a group with the same description pulled a knife on 17-year-old Matthew Bennett and a friend at about 4.30pm. The thieves made the boys empty their pockets and took Matthew’s wallet which had £300 of Christmas money in it.

‘These incidents are extremely distressing for those involved and local officers are carrying out a number of enquiries. ‘It’s extremely disappointing to receive these reports in a time where people are simply trying to enjoy the fresh air in a local park during a nationwide lockdown.

‘We’re aware that local residents are planning to attend the park to conduct their own patrols and though we appreciate their concerns and it’s with the best intentions, I would strongly advise against this for the sake of our on-going investigation and their safety.

‘I’m just the vessel of the Regina Daniels brand while you are the creator’  – Nollywood actress, Regina Daniels celebrates her mom on her birthday
Recharge & win big as PalmPay is rewarding its customers with 50 Million Naira this week
To Top